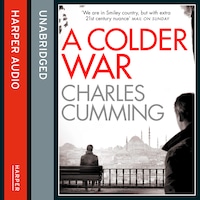 Perfect for fans of John le Carré, a gripping and suspenseful spy novel from ‘the master of the modern spy thriller’ (Mail on Sunday)

MI6's Head of Station in Turkey is killed in a mysterious plane crash. Amelia Levene, chief of the Secret Intelligence Service, wants the incident investigated – quickly and quietly.

The only man she can trust is Thomas Kell, a disgraced spy searching for redemption.

Arriving in Istanbul, Kell discovers that MI6 operations in the region have been fatally compromised: a traitor inside Western Intelligence threatens not just the Special Relationship, but the security of the entire Middle East.

Kell’s search for the mole takes him from London, to Greece, and into Eastern Europe. But when Kell is betrayed by those closest to him, the stakes become personal. He will do anything to see this operation through – including putting himself, and others, in the line of fire…