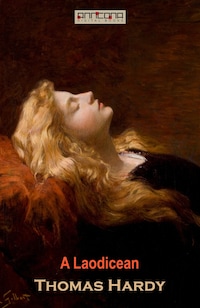 A Laodicean is a novel by Thomas Hardy, published in 1881. Set in the more technologically advanced contemporaneous age, the plot exhibits devices uncommon for Hardy, such as falsified telegrams and faked photographs.

The Laodicean (someone whose religious beliefs are “lukewarm”) of the title is Paula Power who inherits a medieval castle from her industrialist father who has purchased it from the aristocratic De Stancy family, which she is determined to restore. Being of a modern frame of mind, she has the telegraph connected to the castle – and uses it all the time in the course of the story.

George Somerset is a young architect who is invited to compete for the chance of the commission to restore the castle and who falls in love with Paula. However, the brother of Paula’s great friend Charlotte De Stancy – of the aristocratic family that once owned the castle – aided by his villainous illegitimate son, sets out to win Paula for himself.

Although Paula likes the idea of being a De Stancy, she is drawn to George from the start. The various machinations of De Stancy and his son keep the narrative moving along at a fast pace.