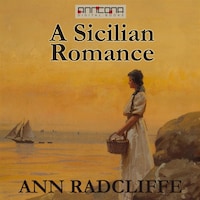 A Sicilian Romance is a gothic novel by Ann Radcliffe. It was her second published work, and was first published anonymously in 1790.

The plot concerns the fallen nobility of the house of Mazzini, on the northern shore of Sicily, as related by a tourist who learns of their turbulent history from a monk he meets at the ruins of their once-magnificent castle. The Mazzini sisters, Emilia and Julia are 'beautiful' young ladies with many talents. Julia quickly falls in love with the young and handsome Italian count Hippolitus de Vereza, but to her dismay her father decides that she should marry Duke de Luovo instead.

The introduction to the Oxford World's Classics edition notes that in this novel "Ann Radcliffe began to forge the unique mixture of the psychology of terror and poetic description that would make her the great exemplar of the Gothic novel, and the idol of the Romantics". The novel explores the "cavernous landscapes and labyrinthine passages of Sicily's castles and convents to reveal the shameful secrets of its all-powerful aristocracy"

Ann Radcliffe (1764-1823) was an English author and a pioneer of the Gothic novel. Her style is romantic in its vivid descriptions of landscapes and long travel scenes, yet the Gothic element is obvious through her use of the supernatural.

Ann Radcliffe is considered one of the founders of Gothic literature. While there were others that preceded her, Radcliffe was the one that legitimised the genre. Sir Walter Scott called her the "founder of a class or school". Jane Austen parodied Radcliffe's novel The Mysteries of Udolpho in Northanger Abbey.