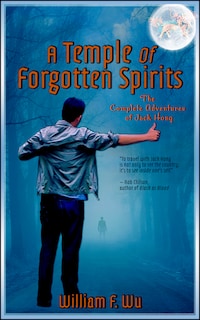 A Temple of Forgotten Spirits

245 pages
TypeE-book
LanguageEnglish
Categories
NovelsNovelsFantasyFantasy
Share this book
A young guy named Jack Hong hitchhikes throughout America following the keilin, a mystical unicorn out of Chinese mythology. The keilin leads him to ten adventures with ghosts and other supernatural figures. These experiences reveal to him not only parts of American history he never knew, but also his own identity and the role he will choose for his life.

The moonlight was still strong, and Lo Man Gong still sat up on the overhead window, where few people and no old men could ever get.

The night before, my resistance had been low, and his presence had somehow seemed tolerable, if not rational. Now I was more clear-headed ... yet he was still here. I didn’t like him as much.

I let my eyes drop closed again. Once I was cured of malaria, I’d be free of him. I had eaten twice today; now, if I slept well, I’d be in sound shape pretty soon.

“You know the keilin, Chinaman Jack?”

That was the Chinese unicorn, a mystical animal whose rare appearances were highly auspicious. In the Cantonese I normally heard, it was pronounced “keilun.” It wasn’t like European ones, though. This unicorn had the body of a deer, the hooves of a horse, the tail of an ox, and a fleshy horn. I knew that much.

“The unicorn?” I opened my eyes and looked at him. As before, the moonlight glowed through his shape.

I watched him silently.

After a while, he looked into my eyes again. “Nobody remember me, Jack. Some people remember, some of my frien’. A few of them. Most, nobody remember at all. No children, no relative. You, Jack. You like me. Unless you change.”

Yes, I knew that. I had already come to understand that. And I knew that he had come for me, here in the middle of the country, away from his home as longtime Californ’. But I didn’t know why.