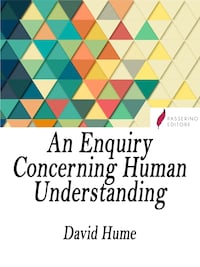 149 pages
TypeE-book
LanguageEnglish
Categories
Non-fictionPhilosophy & Religion
Share this book
An Enquiry Concerning Human Understanding is a book by the Scottish empiricist philosopher David Hume, published in English in 1748.
It was a revision of an earlier effort, Hume's A Treatise of Human Nature, published anonymously in London in 1739–40. Hume was disappointed with the reception of the Treatise, which "fell dead-born from the press," as he put it, and so tried again to disseminate his more developed ideas to the public by writing a shorter and more polemical work.
The end product of his labours was the Enquiry. The Enquiry dispensed with much of the material from the Treatise, in favor of clarifying and emphasizing its most important aspects. For example, Hume's views on personal identity do not appear. However, more vital propositions, such as Hume's argument for the role of habit in a theory of knowledge, are retained.
This book has proven highly influential, both in the years that would immediately follow and today. Immanuel Kant points to it as the book which woke him from his self-described "dogmatic slumber." The Enquiry is widely regarded as a classic in modern philosophical literature.

David Hume (26 April 1711 – 25 August 1776) was a Scottish Enlightenment philosopher, historian, economist, and essayist, who is best known today for his highly influential system of philosophical empiricism, scepticism, and naturalism. Beginning with A Treatise of Human Nature (1739–40), Hume strove to create a naturalistic science of man that examined the psychological basis of human nature. Hume argued against the existence of innate ideas, positing that all human knowledge derives solely from experience. This places him with Francis Bacon, Thomas Hobbes, John Locke, and George Berkeley, as a British Empiricist.