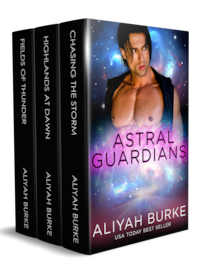 Sometimes all you get is a tiny flash…

Cale Mattox is the first of the Astral Guardians to find his artefact. The woman who wears it has her own past she’s running from.

Taylor Kenyon is tired—the family who wants her dead is beginning to gain on her. This man, Cale, gives her a sense of comfort she’s never had before and creates feelings no one else has. Together they will fight the approaching darkness.

Can he protect her as well as convince her that he needs more than just the artefact?

Things aren’t always what they seem…

Billy Kwan has been sent to Scotland to look into some unusual activity caused by one of Them. What he discovers is not only another artifact, but his mate, and his entire reason for being there has changed. Now, protecting her takes top priority.

Malmuirie ‘Mal’ Gordon is a surgeon, and used to stressful situations, however, when she meets Billy it’s unlike anything she’s experienced before. Together, they might just be able to remain alive long enough to make it back to Oregon and start their life together.

If you listen you will hear the heartbeat of the Earth…

Roz Hill is a woman unafraid of her passion. So when she meets a man who gives her a visceral reaction, she doesn’t ignore it. One night leads to more… The discovery of her mate and finding her artifact.

Altair Sagal has his own code. Roz intrigues him in ways no one has for years. As they learn to be mates, they get tossed into situations that very well may kill them both before their life together even begins.