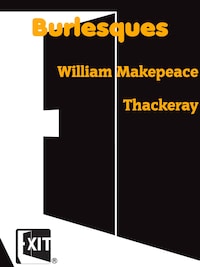 On the 1st of January, 1838, I was the master of a lovely shop in the neighborhood of Oxford Market; of a wife, Mrs. Cox; of a business, both in the shaving and cutting line, established three-and-thirty years; of a girl and boy respectively of the ages of eighteen and thirteen; of a three-windowed front, both to my first and second pair; of a young foreman, my present partner, Mr. Orlando Crump; and of that celebrated mixture for the human hair, invented by my late uncle, and called Cox's Bohemian Balsam of Tokay, sold in pots at two-and-three and three-and-nine. The balsam, the lodgings, and the old-established cutting and shaving business brought me in a pretty genteel income. I had my girl, Jemimarann, at Hackney, to school; my dear boy, Tuggeridge, plaited her hair beautifully; my wife at the counter (behind the tray of patent soaps, &c.) cut as handsome a figure as possible; and it was my hope that Orlando and my girl, who were mighty soft upon one another, would one day be joined together in Hyming, and, conjointly with my son Tug, carry on the business of hairdressers when their father was either dead or a gentleman: for a gentleman me and Mrs. C. determined I should be.
Jemima was, you see, a lady herself, and of very high connections: though her own family had met with crosses, and was rather low. Mr. Tuggeridge, her father, kept the famous tripe-shop near the ”Pigtail and Sparrow,” in the Whitechapel Road; from which place I married her; being myself very fond of the article, and especially when she served it to me—the dear thing!