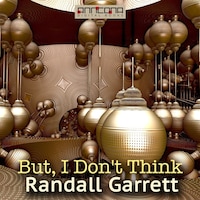 But, I Don't Think

But, I Don't Think is a science fiction novella by Randal Garrett first published in 1959.

In an intragalactic empire organized as an aristocracy (from Execs to lowly Sevens) the empire's ships are being attacked in hyperspace by the ships of the Misfits.

To shoot a Misfit ship in hyperspace requires a Guesser to predict where the ship will have maneuvered to by the time the weapon beam reaches them.

A Guesser is the main character of the story, and while his intuition and precognition are useful, he gets stranded on a planet with no way out.