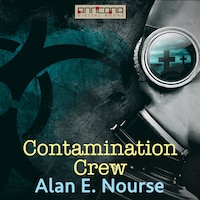 Orders were orders! The creature had to be killed.

But just how does one destroy the indestructible?

A scout ship picks up a blob that consumes everything, organic and inorganic. The doctors aboard are at a loss of how to kill the thing before it eats the ship.

Contamination Crew was first published in If: Worlds of Science Fiction February 1958.