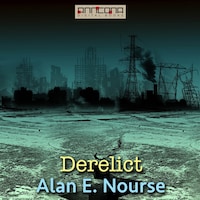 What was the mystery of this great ship from the dark, deep reaches of space? For, within its death-filled chambers—was the avenue of life!

In a world run by a military dictatorship, problem soldiers are posted to a space station out by Saturn to watch for rumored space ships that never come.

But one day a huge derelict ship shows up that could only be from another star implying an interstellar drive.

The Earth has no such drive, and the disgraced captain of the station sees his chance to redeem his career by delivering the drive to his masters.

Derelict was first published in If: Worlds of Science Fiction May 1953.