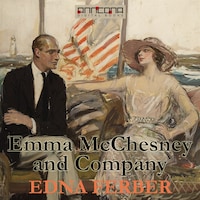 This is the final volume in the trilogy following the smart, stylish, divorced and independent businesswoman Emma McChesney in her career from stenographer, then drummer (traveling salesman) to owner of her own company. (The first was Roast Beef, Medium and the second Personality Plus).

Emma's son, Jock, has moved to Chicago with his new wife. Emma decides to sell in South America and proves she has not lost her magic touch. Emma gets involved in romance, saving a business and many other things. Emma symbolizes the ideal woman at the dawn of the twentieth century: sharp, capable, charming, and progressive.

Edna Ferber first gained success with these stories and later went on to write Show Boat, Giant and other well known books.