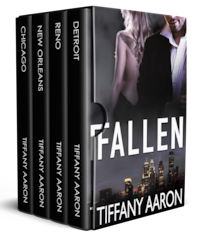 In punishment for rebelling against God, Celeste is banished from Heaven. She has spent centuries on earth trying to keep mortals safe from those of her brethren. As an Enforcer, she still does what she can to protect the innocents from the evil in the world.

Adam Montgomery lives on the wrong side of the tracks in Detroit as the head of a crime syndicate. He's crawled his way to the top, and nothing will keep him from getting what he wants. And what he wants is Celeste.

Yet as they try to track down a serial killer who's more than human, Celeste and Adam discover they are in danger of losing more than their lives. They could lose their hearts to each other, but is their trust enough to survive Celeste's secret?

Sometimes the biggest gamble can turn out to be the best bet.

William Bradford is a Fallen angel and a professional gambler, living in Reno while trying to keep the people who visit there safe from his insane brethren. Something's lurking in the shadows of the city, and William needs all his power to find the truth.

Abigail Hanson deals blackjack, but she hates gamblers, and William Bradford happens to be one of the best. She doesn't understand why she's attracted to him, and why she's willing to overlook his profession.

There's more to William than Abby could ever guess, but when danger comes calling for her, she's glad he's around to keep her safe.

When a fallen angel has to break a Vodou curse to save the woman he loves, all hell just might break loose.

Dominic LaFontaine is a night club owner in New Orleans, and he just happens to be a fallen angel as well. He's been in love with his best friend for a couple of years now, but has never found the courage to tell her. Then she starts dating another man, and he realises he could lose her.

Teresa Ryder has wanted Dominic from the first moment they met five years ago, but until recently he'd never given any indication that he saw her as anything more than a friend. So she finds another man who wants her. Unfortunately, Vincent Delacourte isn't the man she thinks he is, and Teresa finds herself swept up in a Vodou curse.

Now it will take all of Dominic's power and knowledge, along with that of his friends, to save the woman he loves from a madman's clutches.

Neither Grant nor the world is ready for what he unearthed in Peru.

Grant Carson doesn’t believe in angels or anything he can’t see or touch, yet the skeleton he has in the vault at his lab threatens all he thinks to be real. But that isn’t his only problem. Someone is looking for something, and they think Grant has it. He has to turn to Danielle for help.

Danielle Weston has lived on Earth for millennia, and she’s always managed to keep her heart safe. Until she meets Grant Carson, an archaeologist at The Field Museum. He’s never given her the time of day until his lab gets broken into.

Suddenly, Danielle has to decide if telling Grant the truth about where she came from and what she really was is worth risking his love. But if she doesn’t, things worse than losing Grant’s approval could happen, and the world isn’t ready to know the truth.