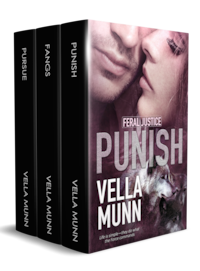 Three dogs search for animal abusers. Punishment is exacted. Life is simple—they do what the Force commands. It’s more complicated for the humans their existence impacts.

Three large gray dogs, ruled by a force only they comprehend, search for animal abusers. When they find them, punishment is meted out with fangs and claws. For the two brothers and their sister, life is simple—they do what the Force tells them to.

Life is much more complicated for the humans their existence impacts. Joe, a former POW, has loved the trio since they were helpless puppies. They make him feel part of something alive. His stepdaughter Rachelle longs to connect with the only father she has ever known, but, from the moment she sees the grays, she knows Joe has made a mistake by letting them run free.

Even though he believes the victims got what they deserved, animal control officer Nate must do everything he can to stop the man-killers. Rachelle and Nate should have very different goals, but life is never that simple.

As death and danger stalk the southern Oregon coast, Mia Sandas and Jeff Julian must trust each other. Can they handle the truth?

When a poacher leaves a wounded elk cow to suffer on the southern Oregon coast, Mia Sandas has no choice but to end its misery. Before she’s forced to do the same to the cow’s orphaned calf, a massive gray dog appears and snaps its neck.

Unknown to Mia, this is only the beginning of a test of her courage and comprehension. As she turns to Fish and Wildlife Officer Jeff Julian, the gray and his four-legged companions stalk local animal abusers.

Jeff and Mia are drawn together as they seek understanding of what is taking place in the forested mountains. They know the canines are committed to primitive justice but why? Who are the targets and what will be the outcome?

Can Jeff and Mia stop more bloodshed—and do they want to?

Vengeful dogs hunt for animal abusers, but they can’t do it alone. They need Native American Niko Fox. Will she let Darick Creech protect her?

Niko Fox’s life changes the day massive gray dogs force her to follow them into southern Oregon’s coastal wilderness. When she spots an emaciated mare and the mare’s newborn foal, she rescues the helpless animals. Someone is responsible for the horses’ condition, someone Niko promises to make pay for the crime of animal abuse.

Because of a past conflict with him, she wants nothing to do with Fish and Wildlife officer Darick Creech, but the big, compassionate man understands what the grays represent as well as she does. Darick knows she won’t stop looking for truth and justice. He vows to mend the rift between them so he can do everything possible to ensure her safety. There’s nothing personal between them, nothing to distract them from their shared goal. Or is there?

Niko’s search for answers leads her to an abused dog. As she frees the animal and places it in her vehicle for a trip to the vet, the grays watch.

Niko is special to them—and to the force that rules their behavior. They need her.

Then, as Darick and Niko expected, the grays make their first human kill.