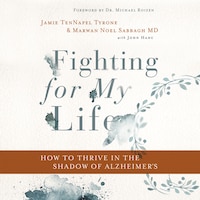 Fighting for My Life

Jamie Tyrone was forty-nine years old when she learned she had a genetic predisposition toward Alzheimer’s disease—in fact, her genes translated to a 91 percent chance that she would contract the disease during her lifetime. Surprised by the way she learned of the diagnosis through genetic testing, and painfully familiar with Alzheimer’s because of her family history and her experience as a nurse, Jamie felt as if she had a ticking time-bomb inside her, ready to go off at any moment.

After an initial bout with depression, Jamie decided to take action rather than concede defeat. She started by founding B.A.B.E.S (Beating Alzheimer’s By Embracing Science) to raise money and awareness in the search for a cure. Energized by that community, Jamie teamed up with renowned neurologist Dr. Marwan Sabbagh to write Fighting for My Life as a practical, helpful guide for those who know they are at greater risk of contracting Alzheimer’s Disease.

This audiobook is unique because it offers expert medical advice from Dr. Sabbagh alongside Jamie’s real-life experiences as a woman living in the shadow of Alzheimer’s. In addition, Fighting for My Life is one of the only titles on the market that takes an honest look at the pros, cons, and possible dangers of genetic testing.