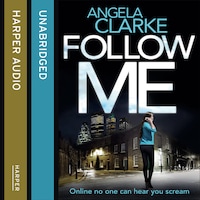 **'We've been waiting for a novel that shows just how creepy and scary social media actually is and this is it. Angela Clarke knows exactly which buttons to press. #creepedmeout’ TANIA CARVER**

The ‘Hashtag Murderer’ posts chilling cryptic clues online, pointing to their next target. Taunting the police. Enthralling the press. Capturing the public’s imagination.

But this is no virtual threat.

As the number of his followers rises, so does the body count.

Eight years ago two young girls did something unforgivable. Now ambitious police officer Nasreen and investigative journalist Freddie are thrown together again in a desperate struggle to catch this cunning, fame-crazed killer. But can they stay one step ahead of him? And can they escape their own past?

ONLINE, NO ONE CAN HEAR YOU SCREAM …

‘Written in the sharpest style, the story races along … there’s a verve to it that’s impossible to resist. Clarke is certainly someone to watch!’ DAILY MAIL

‘An appealing flawed female lead [for] readers who enjoyed THE GIRL ON THE TRAIN … with a dark and filthy wit.’ CRIME SCENE MAGAZINE

'Pacey, gripping, and so up-to-the-minute you better read it quick!’ CLAIRE McGOWAN

‘Follow Me is literally gripping – the tension levels were forcing me to clutch the book so hard that my hands hurt!’ Daisy Buchanan, GRAZIA