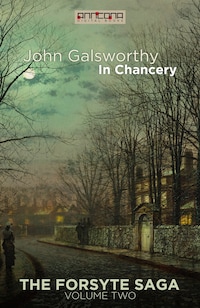 In Chancery, first published 1920, is the second novel in the trilogy The Forsyte Saga, a series of three novels and two interludes published between 1906 and 1921 by Nobel Prize-winning English author John Galsworthy. In 2003, The Forsyte Saga was listed on the BBC's The Big Read poll of the UK's ”best-loved novel”.

Also included in this edition is Awakening, the second interlude in The Forsyte Saga.