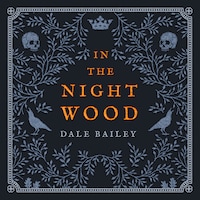 In the Night Wood

A FOREST. A BOOK. A MISSING GIRL.

NOMINATED FOR THE WORLD FANTASY AWARD AND THE SHIRLEY JACKSON AWARD FOR BEST NOVEL
BEST BOOKS OF THE YEAR – TOR.COM

Charles Hayden has been fascinated by a strange Victorian fairy tale, In the Night Wood, since he was a child. When his wife, Erin – a descendant of the author – inherits her ancestor’s house, the couple decide to make it their home. Still mourning the recent death of their daughter, they leave America behind, seeking a new beginning in the English countryside.

But Hollow House, filled with secrets and surrounded by an ancient oak forest, is a place where the past seems very much alive. Isolated among the trees, Charles and Erin begin to feel themselves haunted – by echoes of the stories in the house’s library, by sightings of their daughter, and by something else, as old and dark as the forest around them.

A compelling and atmospheric gothic thriller, In the Night Wood reveals the chilling power of myth and memory.