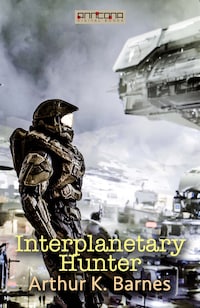 In the not-­so-­distant future, humans have colonized much of the solar system and discovered that dangerous life abounds on Venus, Jupiter, Neptune, Saturn, and some of the comets.

Novellas included are: The Hothouse World, The Dual World, Satellite Five, The Energy Eaters and The Seven Sleepers.

On Venus, interplanetary hunters Strike and Carlyle stalk the monstrous Whip, suffer under the onslaughts of the Whiz-Bang Beetles and track the huge Shovel-Mouth. Travelling on to Jupiter, Quade and Carlyle pit themselves against the fire-breathing Cacus on the fifth Jovian satellite.

On the Gas Giants the hunters meet the Shaggies, the Goras and the amazing, tunnel-boring Rotary Mole. Venturing to Almussen’s Comet they will have to battle against the fierce three-headed Hyclops and the intelligent, extra-Solarian Protean.

It is worth mentioning that one of the main characters is the female captain of a ship. Not so often seen in fiction from the 1930s.

Barnes was most noted for his vivid and believable portrayals of alien life. As such, he is compared to Stanley G. Weinbaum. Before Barnes (and Weinbaum), SF writers usually portrayed aliens as earth-like monsters, with little originality.