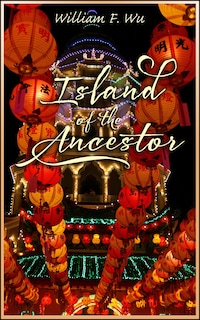 Island of the Ancestor

22 pages
TypeE-book
LanguageEnglish
Categories
NovelsNovelsScience Fiction
Share this book
Daniel Eng Zisuey works at a combined resort and religious shrine. An American, he majored in drama and has a great job. He portrays himself on stage as one of his own ancestors reborn, because his benefactor, Eng Sen, used ancient DNA to clone him. When some worshippers have a tragedy, Daniel wants out. Then he learns Eng Sen does not consider quitting to be in the job description.
~~~~~ Excerpt ~~~~~
Eng Sen staggered to his feet on stage left, sweating heavily; now his silk suit was rumpled and his tie askew. He snatched the cordless mike clipped to the robe of a priest. He wheezed as he spoke into the mike.
“I am Eng Sen, owner of this island,” he said harshly in Cantonese. “This temple is here for all of you, for all of us, for the whole Eng clan!”
“It’s here to steal your money!” Daniel shouted, now holding his mike.
Eng Sen waved the acolytes up toward Daniel. “If this man has betrayed your trust, he has betrayed me as well! I have been fooled, too!”
The crowd shouted angrily in many voices, confused.
Daniel saw the acolytes hoisting up onto the dais. He summoned dignity and authority into his voice.
“I am Eng Zisuey,” he intoned in Cantonese. “I am the Zhou Xian of this clan. I’m a man, not a ghost!”
Several acolytes got their footing on the dais. Daniel dropped the mike and fled stage right; behind him, the crowd roared again. He skipped down a staircase, then flung off the flapping white undertunic.
Daniel ran down the hall in his shoes and underwear. Leitch would not be at his dressing room door so early in the ritual. Ahead of the acolytes, he palmed open his dressing room door, slipped inside, and palmed it shut.
He knew Personal Security had key access to his dressing room and house. Grabbing a shirt and pants, he palmed open the tunnel to get his passport from his desk. Then he realized some guards could be headed there already.
With the clothes under his arm, he yanked open the door to the balcony and stepped out into the cool, humid evening air. He closed the door softly and vaulted over the wooden rail of the balcony to the cushion of pine-needled ground. In deep shadows, he paused to dress.
Daniel heard voices shouting inside his dressing room. Warily, he moved down the rough, uneven mountainside in the darkness. Leitch had never hidden his contempt for Daniel, and might relish the chance to have his men brutally punish the privileged Original Ancestor who had now endangered the salaries of them all.
Daniel had to get off the island.
***
At midnight, Daniel neared the docks, gasping for breath and slimy with sweat. Peering around a corner, he saw Personal Security officers where they usually did not patrol. Eng Sen had not sent a general alert to island security; Grandfather wanted Daniel brought back quietly.
“Dan,” a woman whispered behind him.
He whirled, ready to run despite his exhaustion.
“I thought you might come to the docks,” Meilin whispered in English. “I’ve watched for you. I live nearby. You may sleep on my couch.”
Daniel studied her. Then he glanced at the Personal Security guards around the corner. If she wanted to turn him in, she could call them.
“All right. I can’t leave anyhow. No wallet or passport.”
Meilin pulled him out into the street by his arm and raised her voice. “You lousy drunk! You’ve shamed our entire family. Come on!”
Playing along, Daniel weaved and staggered against her, keeping his face averted from the Personal Security guards. No one stopped them.