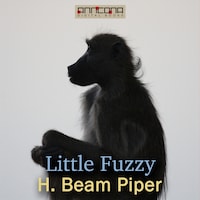 Little Fuzzy is a 1962 science fiction novel by H. Beam Piper. It was nominated for the 1963 Hugo Award for Best Novel.

One day Jack Holloway, prospector on the planet Zarathustra, finds what seems to be a small monkey with golden fur; these new introductions (for the first brings a family) are tiny hunters, and prove to be curious and capable tool users.

These creatures are obviously intelligent, but are they animals or are they sapient? If they are sapient the planet will be declared a protected zone and the company that is developing the planet commercially will lose their exclusive rights to the resources...