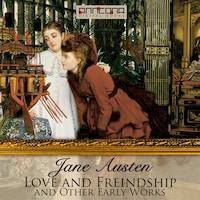 Love & Freindship, and Other Early Works

Love and Freindship [sic] and Other Early Works, A Collection of Juvenile Writings by Jane Austen was first published in 1922 and includes a preface by G. K. Chesterton.

This book draws together some of Jane Austen's earliest literary efforts. It includes "Love & Freindship" and "Lesley Castle" both told through the medium of letters written by the characters. It also contains her wonderful "History of England" and a "Collection of Letters" and lastly a chapter containing "Scraps". In these offerings, we may see the beginnings of Miss Austen's literary style. We may also discern traces of characters that we encounter in her later works. G. K. Chesterton in his preface, for example, says of a passage in Love and Freindship; "... is there not the foreshadowing of another and more famous father; and do we not hear for a moment, in the rustic cottage by the Uske, the unmistakable voice of Mr. Bennet?" These works are certainly worth exploring for their own sakes and not simply as historical relics.

Jane Austen (1775-1817) was an English novelist whose works of romantic fiction, set among the landed gentry, earned her a place as one of the most widely read writers in English literature. Her realism, biting irony and social commentary have gained her historical importance among scholars and critics.

In 1994, American literary critic Harold Bloom placed Austen among the greatest Western Writers of all time. In a 2002 poll to determine whom the UK public considers the greatest British people in history, Austen was ranked number 70 in the list of the "100 Greatest Britons". In 2003, Austen's Pride and Prejudice came second in the BBC's The Big Read, a national poll to find the "Nation's best-loved book."