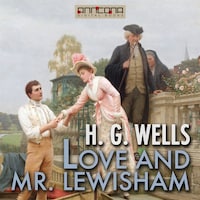 It was among his first fictional writings outside the science fiction genre. Wells took considerable pains over the manuscript and said that "the writing was an altogether more serious undertaking than I have ever done before."

H.G.Wells’ humorous early novel, drawing on his own life, shows how the teaching profession, science and politics in late 19th century England. – as well as involvement in spiritualism – have to compete with love.

Love and Mr Lewisham was well received, and Charles Masterman told Wells that he believed that along with Kipps, it was the novel most likely to endure. Richard Arman Gregory compared the novel to Thomas Hardy's Jude the Obscure.

Herbert George "H. G." Wells (1866-1946) was an English writer, now best known for his work in the science fiction genre. He was also a prolific writer in many other genres, including contemporary novels, history, politics and social commentary, even writing textbooks and rules for war games.

Wells is one person sometimes called "The Father of Science Fiction", as are Jules Verne and Hugo Gernsback. His most notable science fiction works include The War of the Worlds, The Time Machine, The Invisible Man and The Island of Doctor Moreau.