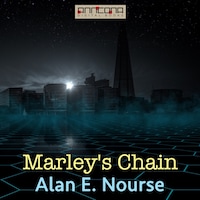 Tam's problem was simple. He lived in a world that belonged to someone else.

A strange little story about a man back on Earth after eight years in ”the rings.”

Looking for work, he can't find any. It seems he was a member of a losing side in a war, and there is prejudice against his kind.

Marley’s Chain was first published in If Worlds of Science Fiction September 1952.

Total Running Time (TRT): 33 min.
Alan Edward Nourse (1928-1992) was an American science fiction author and physician. He wrote both juvenile and adult science fiction, as well as nonfiction works about medicine and science. His SF works generally focused on medicine and/or psionics. Psionics refers to the practice, study, or psychic ability of using the mind to induce paranormal phenomena. Examples of this include telepathy, telekinesis, and other workings of the outside world through the psyche.