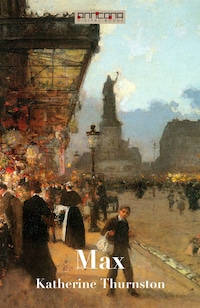 Max is a novel by bestselling author Katherine Thurston first published in 1910.

In 1910, Thurston was back on the New York Times best selling books of the year list at number 4 with her novel, Max.

Max is the story of a young Russian princess, who flees the prospect of a loveless marriage. Disguised as a boy, she flees to the Montmartre Quarter of Paris the night before her arranged marriage and becomes an artist and a cross-dresser.

In Paris she meets Ned, an Irishman who lives in Paris six months of the year. Ned makes friends with Max all the while thinking she is a boy. . .

Katherine Cecil Thurston (1875-1911) was an Irish novelist. Katherine Thurston's novels achieved success not only in Great Britain but in the United States as well.

Her best known work was a political thriller titled John Chilcote, M.P. (The Masquerader in the United States) published in 1904. It was on the New York Times Best Seller list for two years, ranking as the third best-selling book for 1904 and the seventh best selling in 1905. Ms. Thurston's next book, The Gambler, came out in 1905 and it too made the list of bestselling novels in the United States for that year, coming in at number 6. It marked the first time the New York Times recorded any author, female or male, as having two top ten books in a single year.