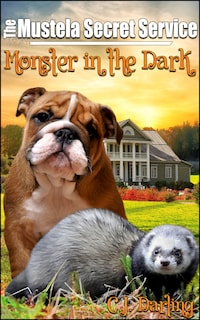 Monster In The Dark

37 pages
TypeE-book
LanguageEnglish
Categories
NovelsNovelsYoung Adult
Share this book
The ferrets' Human pets have gone away for Christmas, and they're having fun playing. Suddenly they see a horrible ugly face in the window. It's a monsterand it's trying to get into their house!

Goliath might be the biggest ferret in the Mustela Secret Service, but he's really just a frightened baby. How can he protect old Nova and his friends? Somehow he has to be brave and strong!

It was a monster! A gigantic ugly face was staring into the room. It had little black eyes, a big black nose, and strange little ears that flopped down on either side of its head. Its whole face was a mass of floppy brown and white wrinkles. Sharp white teeth pointed in all directions as it pushed its nose against the clear window glass.

Suddenly it threw its head back and howled again. It was a sad, lonely sound that sent the ferrets into a panic. Taz threw himself on top of Nova to protect her. Maggie and Zephyr dashed to the other end of their cage so fast that they fell down the ramp, and tumbled over each other. Goliath let out a single shrill scream, but he was too scared to move.

Down at the bottom of the cage, the older ferrets shivered and hid under their blankets. Zephyr finally stopped tumbling when she landed right on top of old Gonzo. Maggie fell against her, and poor Gonzo yelled at both of them to Get Off!

”Let me see." Nova was buried under Taz, who was shaking so hard that the entire cage was swaying. "Taz, get off me!"

"Taz!" Nova tried to wiggle free, then reached over and bit his foot hard. "Off!"

"Ouch!" Taz jumped, and Nova crawled out from under him. "Nova, that hurt!"

"I couldn't breathe." Nova rubbed her whiskers against his sore foot in apology. "You're heavy."

She nudged him in the ribs, and smiled up at him. "You can't help being big. It means you're healthy."

Poor Goliath was still standing frozen, staring at the window with huge eyes. "Wh-where did it go?"

Nova climbed up onto his shoulders so she could see the window better. The monster's big nose had left a wet smudge on the glass, but Taz was right. The monster was gone.

"I don't know. But it's gone now, Goliath." Gently she rubbed at his trembling ears with her nose. "You're safe. Nothing can get into the house unless Mom Human or Dad Human let it in."

"They'll never let a monster into the house." Maggie had climbed back up to the top level. Goliath got scared so easily that sometimes she got mad at him. But this time, she had been scared, too. So she didn't laugh at him, or make fun of him. "They'll never do anything that might hurt us."

"That's right." Zephyr was just behind her. "They take good care of us." She rubbed against Goliath, and felt him relax. "We're all safe as long as we stay inside the house."

Taz was still staring at the window, but his fur had calmed down again. "You've been outside without a Human guard, Zephyr. What do you think it was?"

Zephyr loved to talk about the time she'd snuck out of the house, and had romped all around the farm for two whole days before Dad Human had finally caught her in the barn and brought her back into the house. "There are lots of wild animals outside," she told him with big, serious eyes. "I've never seen anything like that before. It was too ugly to be a farm animal, so it must have been something wild."