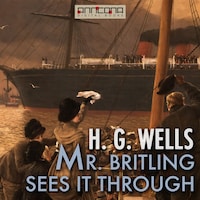 Mr. Britling Sees It Through

Mr. Britling Sees It Through is H.G. Wells's ”masterpiece of the wartime experience in England.” The novel was published in September 1916.

Mr. Britling Sees It Through tells the story of a renowned writer, Mr. Britling, a protagonist who is quite evidently an alter ego of the author. The garrulous, easy-going Mr. Britling lives with family and friends in the fictional village of Matching's Easy, located in the county of Essex, northeast of London.

The novel begins with a lighthearted account of an American visiting England for the first time, but the outbreak of war changes everything.

Day by day and month by month, Wells chronicles the unfolding events and public reaction as witnessed by the inhabitants of one house in rural Essex. Each of the characters tries in a different way to keep their bearings in a world suddenly changed beyond recognition.

This book was published in 1916 while the first world war was still in progress, so no clear resolution was possible. Wells did not know how long the war would last or which side would ultimately win, but he hoped that somehow, something good might eventually come of it.

Mr. Britling Sees It Through was one of the most popular novels in the United Kingdom and Australia during World War I. Maxim Gorky called the novel ”the finest, most courageous, truthful, and humane book written in Europe in the course of this accursed war . .  at a time of universal barbarism and cruelty, your book is an important and truly humane work.”