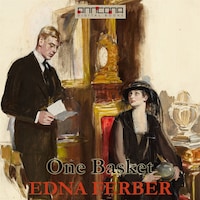 One Basket is a sparkling collection of 7 short stories by Edna Ferber and includes some that are considered her all time best like The Woman Who Tried To be Good and The Maternal Feminine.

Writing for and about women, Edna Ferber touches the very heart and soul of what it means to be human; to make good choices and bad; to be weak and strong.

The stories included in One Basket are: