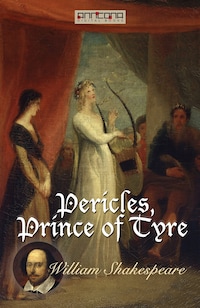 Pericles, Prince of Tyre is a Jacobean play written at least in part by William Shakespeare and included in modern editions of his collected works despite questions over its authorship, as it was not included in the First Folio.

As first a riddle thrusts Pericles onto the horns of a dilemma. He knows the answer to the riddle King Antiochus has presented to him as a prerequisite to winning the hand of his daughter. The problem is if he fails to offer the solution, he will be put to death. But by exposing it he will reveal the King's incestuous relationship with the daughter.

Pericles responds to his dilemma by starting on a tour that includes not only ”normal experiences” like storms and famines, but also such abnormal and paranormal phenomena as pirates abducting children, births and burials at sea, the waking of the dead and a lengthy visit to a brothel. Eventually Marina marries Lysimachus and they become rulers of Tyre.