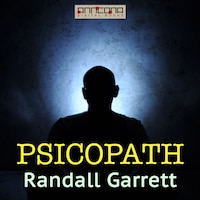 Psichopathis a short science fiction short story by Randall Garrett.
A classic Randall Garrett tale...One way to hide an ex-officio agency of the United States Government was to label it truthfully - The Society For Mystical And Metaphysical Research. In spite of the fact that the label was literally true, it sounded so crackpot that no one but a crackpot would bother to look into it.
As a consequence, better than ninety per cent of the membership of the Society was composed of just such people. Only a few members of the "core" knew the organization's true function and purpose.
"TOTAL understanding, in one sense, would require that a person actually BECOME another person -that he be able to feel, completely and absolutely, every emotion, every thought, every bodily sensation, every twinge of memory, every judgment, every decision, and every sense of personal identity that is felt by the other person, no more and no less.
Such totality is, obviously, neither attainable nor desirable. The result would be a merger of identities, a total unification. And, as a consequence, a complete loss of one of the human beings involved."
Psichopath was first published in Analog Science Fact & Fiction in October 1960. AUDIO: read by Dan Gruzinsky, length 1 hour, 1 min.  Also available as E-Book: ePUB, 9,400 words, average reading time 45 min.
Randall Garrett (1927-1987) was an American science fiction and fantasy author. He was a prolific contributor to Astounding and other science fiction magazines of the 1950s and 1960s. He instructed Robert Silverberg in the techniques of selling large quantities of action-adventure science fiction, and collaborated with him on two novels about Earth bringing civilization to an alien planet.