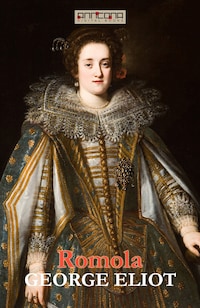 Romola is a novel by George Eliot, first published in 1863.

Romola is a historical novel set in the fifteenth century, and is ”a deep study of life in the city of Florence from an intellectual, artistic, religious, and social point of view”.

The story takes place amidst actual historical events during the Italian Renaissance, and includes in its plot several notable figures from Florentine history.

George Eliot's own favorite among her novels, this novel tells the story of Romola, the intelligent daughter of a blind scholar, who is falling in love with a man who is going to change her life and the politics of Florence in a way she doesn't like.