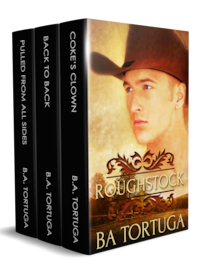 How does Dillon take care of Coke when Coke’s destroying himself?

Bullfighter Coke is having a rough time in the Roughstock universe. When his dear friend Sam Bell is injured at the finals of the bull riding season, he takes that and his injuries pretty hard. His very own clown, Dillon, is determined to take care of Coke, which is tough when Coke is usually the one to care for everyone. Coke has a huge secret from his past, though, and, when Dillon digs to discover what it is, the skeletons in Coke’s closet threaten to destroy both men.

Landon knows who he wants, he’s been dreaming about Adam Taggart his whole life. Tag, though? He thinks Landon’s too poor, too young, too wrong to be his.

Landon Gaudet may not be the best bull rider on earth, but he knows that’s where the money is in rodeo. His Cajun heart is more involved with horses, though, and with finding the cowboy he’s been dreaming of all of his relatively short life. Adam Taggart has been around the block more than once, and while he thinks Landon is special, he also thinks the kid deserves better than a safety man with more than his share of notches on the bedpost.

Adam does everything he can to resist Landon, but there’s not a man alive who doesn’t love being loved, so eventually he gives in. Landon can’t believe that Adam is finally with him, that his cowboy has finally come around to his way of thinking. The only problem is that Adam isn’t sure he deserves love, or that he really has any to give. He questions everything from his need for Landon to his family’s assertion that he can do better than a boy from the bayou. Can Landon show Adam that sometimes magic is real, and that all you really need is to have a little faith?

Pulled from All Sides

Balta is all fire and fury, Joa is his haven. What happens when Raul becomes their third?

Joa is an anomaly on the bullriding circuit—he’s Brazilian but grew up in Texas, so he’s not sure where he fits in. Champion Brazilian rider Balta knows just where he wants Joa to be, both in his life and in his bed.

Raul is new to the bullriding circuit and needs their help learning the ropes. From the start, Raul knows that Joa belongs with Balta, but he also knows that Balta’s career is on its way down and the world is ripe for another champion from Brazil.

When Balta decides that Raul is just what he and Joa need to even out the balance of power, they have to find common ground—professionally, publicly and, most importantly, personally.