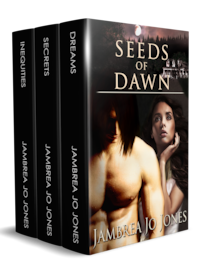 Seeds of Dawn: Part One: A Box Set

Anabella's dreams bring her to David, but is he the salvation she's looking for?

Anabella Pouge is plagued with powers she can't control, making her life far from normal when all she wants is ordinary. Change is coming her way when she must flee with a man straight out of her dreams.

David Sanders is sent to find Anabella. Without her, the future of his wolf pack is in danger. Forced to travel to the middle of nowhere, David finds Anabella might mean more than just his pack's survival.

Will the two make it back to the pack in time? Can Anabella and David accept each other and the coming changes to their lives?

Secrets: They have a way of sneaking up on you.

Max Rockwell is the muscle. Give him a good fight and he is ready to go. Sick a sexy reporter on him and he is doomed. The pack secrets are safe with him. He wouldn't spill them even if his life depended on it. But what if it isn't his life he has to worry about?

Valerie Thomas wants a story and the smoking hot Max will give her want she wants. What she gets is more than she bargained for. Creatures she couldn't even begin to imagine are after her all because fate is a bitch.

Sometimes you need to take justice in your own hands.

Russell Masters is having a pity party. Woe is him—he isn't fit to be in charge. If he doesn't change his way of thinking he could lose the very thing that could make him stronger.

Vivian Sommer can't understand why her mate won't claim her. They are destined to be together and she wants to be Russ' with an all fire passion. It means family and finally belonging. But she isn't going to sit around while he figures out they are better together.

Her tribe isn't willing to let her go with out a fight. Russ and Vivian must work together and stand strong because another threat could shatter their very existence.