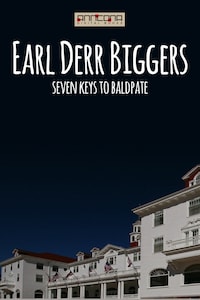 Seven Keys to Baldpate is the first mystery/romance novel by Earl Derr Biggers published in 1913. A famous author comes to a summer mountain resort in the dead of winter, determined to find peace and quiet to write his next book. But before his first night is out, a steady stream of unexpected visitors begins to fill the hotel...men and women with stories of love, loss, and flight...none of them telling the truth. Before the week is out, there will be gunfire, bribery, fights in the snow, and hidden truths unmasked. ”Seven Keys to Baldpate” is a mystery that will leave you guessing to the end.

The novel Seven Keys to Baldpate led to seven films of the same title and at least two with different titles (House of the Long Shadows, Haunted Honeymoon) but essentially equivalent plots. George M. Cohan adapted the novel as an occasionally revived stage play of the same name.

The 1917 American silent mystery/thriller film produced by George M. Cohan was based on Cohan's play of the novel. Cohan himself stars in this silent version along with Anna Q. Nilsson and Hedda Hopper, billed under her real name Elda Furry. One version of the play preceded this movie in 1916 and numerous versions followed in the succeeding decades such as the early RKO talkie starring Richard Dix.