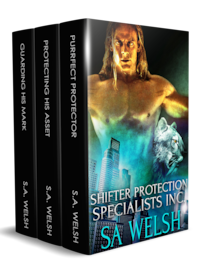 Never play cat and mouse with a saber-tooth tiger.

When Kale Andrews gets disturbing mail from an obsessed fan, his brother drags him to Shifter Protection Specialists, Inc. Kale reluctantly agrees to have a bodyguard, but when a tall, muscular blond walks into the office emanating power and a sexy dose of danger, Kale’s doubts about needing the man with him twenty-four hours a day quickly disappear.

The easy babysitting job Aleksi was promised quickly changes from strange mail to threatening deliveries, so Aleksi has to become creative to keep his protectee out of danger. Everyone knows models are self-centered and shallow, so why does being with Kale make him feel like he finally has a home? Since he’s a saber-tooth tiger and naturally dominant, most people aren’t strong enough to be with him in a relationship or even as a friend. Yet Kale seems to calm his beast, simultaneously exciting the man in Aleksi.

Neither man expects nor wants a relationship with strings, but as they grow closer, Aleksi realizes that Kale might be his mate. With an obsessed fan escalating toward murder, Aleksi isn’t sure that even his tiger can keep his mate safe.

Scott knows his boring day is over the second a bloody and scared George Kelvin crashes into his office, claiming people are trying to kill him. He knows he should pass the case over to one of his brothers, but he can’t seem to do it. The strength and resilience of the man mixed with a quirky sense of humor fascinate him. He may be a human in the company of powerful shifters, but he’s just as deadly and well trained as the rest of his brothers.

With devious CIA agents, foreign forces gunning for what George possesses and George’s power-hungry father, who is also Deputy Director of the FBI, Scott begins to wonder if he’s bitten off more than he can chew.

George always knew his father was dangerous and cruel. However, he never thought that those titles would inadequately sum up the lengths his father is willing to go to, to get what he wants. The only chance he has is using whatever is on file against his father. Staying alive to do that is another challenge. When he runs into the Shifter Protection Specialists, Inc. office, he’s desperate, but isn’t convinced anyone can protect him from his father. Risking more than he’d thought possible, he discovers that maybe he is more than he’s always been taught to believe.

One thing is for certain—his father is not going to give up easily.

Beware the bite of a king.

Khan is a king cobra shifter with a serious mistrust of anyone outside his brothers at SPSI—and he has good reason for it. As a teenager, he was subjected to the whims and experiments of a mad scientist. Since becoming part of a real family, he’s thrived in his job as a close protection specialist.

One night, he meets a pretty human who interests him on a level he hasn’t experienced before, but old fears and revelations force him to put distance between them. Unable to stay away, however, Khan creates the persona of a courier to deliver the venom Casey needs and find out exactly what the human will do.

Dr. Casey Jameson is working toward a deadline. He needs snake-shifter venom to continue his research and create a cure to save someone he loves. When he goes in search of a donor, he meets Khan, but he’s confronted with the irresistible roughness of Khan and ends up taking the shifter home. However, when Khan finds out who and what he is, Khan leaves him high and dry.

The appearance of Roan, a courier, in his life is perfect timing, but Casey may get more than he bargains for and will soon have to think carefully about who he can trust if he wants to live long enough to complete his work.

When an old lover and boss becomes a real threat to Casey’s safety, Khan must come clean and keep Casey safe before they both lose something precious.