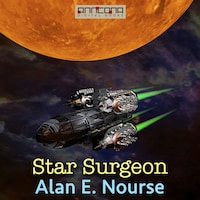 Born on a planet of a distant star, Dal Timgar is the first alien to attempt to become a qualified physician of Hospital Earth.

Dal Timgar had always wanted to be a doctor. As a Garvian and the first non-human to study medicine on Hospital Earth, he must face enormous adversity from classmates, professors, and some of the highest ranking physicians on all of Earth.

Will his efforts be enough to earn him the Silver Star of a Star Surgeon?

Part of this book was published in Amazing Science Fiction Stories.