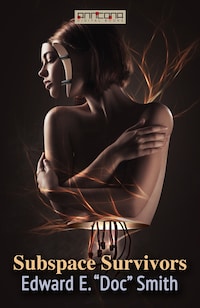 ”There has always been, and will always be, the problem of surviving the experience that any trained expert can handle ... when there hasn't been any first survivor to be an expert! When no one has ever gotten back to explain what happened....”

A team of space travelers are caught in a subspace accident which, up to now, no one has ever survived.

But some of the survivors of the Procyon are not ordinary travelers. Their psi abilities allow them to see things before they happen. But will it be enough?

Subspace Survivors first appeared in the July 1960 issue of the magazine Astounding Science and Facts.

Edward Elmer Smith (also E. E. Smith or E. E. "Doc" Smith; 1890-1965) was an American food engineer (specializing in doughnut and pastry mixes) and an early science-fiction author, best known for the Lensman and Skylark series. Smith's novels are generally considered to be classic space operas, and he is sometimes called the first of the three "novas" of 20th-century science fiction (with Stanley G. Weinbaum and Robert A. Heinlein as the second and third novas).