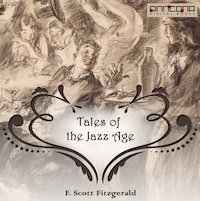 Tales of the Jazz Age

8h 41m
299 pages
NarratorDon W. Jenkins
TypeAudiobook, E-book
Categories
NovelsNovelsClassicsShort Stories
Share this book
Tales of the Jazz Age (1922) is a collection of eleven short stories by F. Scott Fitzgerald. Divided into three separate parts, according to subject matter, it includes one of his better-known short stories, ”The Curious Case of Benjamin Button”. All of the stories had been published earlier, independently, in either Metropolitan Magazine (New York), Saturday Evening Post, Smart Set, Collier's, Chicago Sunday Tribune, or Vanity Fair.
My Last Flappers
”The Jelly-Bean”
”The Camel's Back”
”May Day”
”Porcelain and Pink”
Fantasies
”The Diamond as Big as the Ritz”
”The Curious Case of Benjamin Button”
”Tarquin of Cheapside”
”Oh Russet Witch!”
Unclassified Masterpieces
”The Lees of Happiness”
”Mr. Icky”
”Jemina”
Francis Scott Key Fitzgerald (1896-1940) was an American author of novels and short stories, whose works are the paradigmatic writings of the Jazz Age, a term he coined. He is widely regarded as one of the greatest American writers of the 20th century. Fitzgerald is considered a member of the ”Lost Generation” of the 1920s. He finished four novels: This Side of Paradise, The Beautiful and Damned, The Great Gatsby (his most famous), and Tender Is the Night. A fifth, unfinished novel, The Love of the Last Tycoon, was published posthumously. Fitzgerald also wrote many short stories that treat themes of youth and promise along with age and despair.
Fitzgerald's work has been adapted into films many times. His short story, ”The Curious Case of Benjamin Button” (included in this book), was the basis for a 2008 film. Tender is the Night was filmed in 1962, and made into a television miniseries in 1985. The Beautiful and Damned was filmed in 1922 and 2010. The Great Gatsby has been the basis for numerous films of the same name, spanning nearly 90 years; 1926, 1949, 1974, 2000, and 2013 adaptations. In addition, Fitzgerald's own life from 1937 to 1940 was dramatized in 1958 in Beloved Infidel.