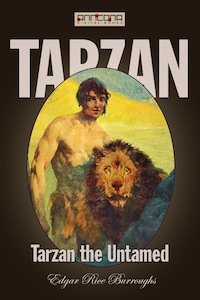 364 pages
AuthorEdgar Rice Burroughs
TypeE-book
SeriesThe Tarzan series (part 7)
Categories
FictionNovels
Share this book
Tarzan the Untamed is a book written by Edgar Rice Burroughs, the seventh in his series of books about the title character Tarzan. It was originally published as two separate stories serialized in different pulp magazines; "Tarzan the Untamed" (AKA "Tarzan and the Huns") in Redbook from March to August, 1919, and "Tarzan and the Valley of Luna" in All-Story Weekly from March to April 1920. The two stories were combined under the title of the first in the first book edition, published in 1920 by A. C. McClurg. In order of writing, the book follows Jungle Tales of Tarzan, a collection of short stories about the ape-man's youth. Chronologically, it follows Tarzan and the Jewels of Opar.

The action is set during World War I. While John Clayton, Lord Greystoke (Tarzan) is away from his plantation home in British East Africa, it is destroyed by invading German troops from Tanganyika. On his return he discovers among many burned bodies one that appears to be the corpse of his wife, Jane Porter Clayton. Another fatality is the Waziri warrior Wasimbu, left crucified by the Germans.

Maddened, the ape-man seeks revenge not only on the perpetrators of the tragedy but all Germans, and sets out for the battle front of the war in east Africa…

Tarzan the Untamed was one of Burroughs’ most controversial novels. The controversy stemmed from his blanket portrayal of Germans as stereotypical, unredeemable villains, one that was also extended to his contemporary science fiction novel The Land That Time Forgot. This portrayal, while perhaps understandable in wartime, ultimately ruined the market for his writing in Germany, where the character of Tarzan had formerly been quite popular. Burroughs’ later introduction of heroic Germans into his subsequent novels Tarzan and the Lost Empire, Tarzan at the Earth’s Core and Back to the Stone Age did little to repair the damage to his reputation there.

Regardless of its flaws, Tarzan the Untamed is an important work in the Tarzan series. It begins a sequence continuing with Tarzan the Terrible, Tarzan and the Golden Lion and Tarzan and the Ant Men in which Burroughs' vivid imagination and storytelling abilities hit their peak, and which is generally considered a highlight of the series.

Tarzan is a fictional character, an archetypal feral child raised in the African jungles by the Mangani "great apes"; he later experiences civilization only to largely reject it and return to the wild as a heroic adventurer. Created by Edgar Rice Burroughs, Tarzan first appeared in the novel Tarzan of the Apes (magazine publication 1912, book publication 1914), and then in twenty-five sequels, three authorized books by other authors, and innumerable works in other media, authorized and not.