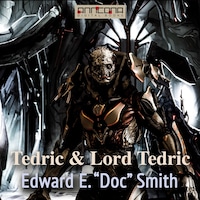 In Tedric (53 min), the immensely powerful hero, Tedric, is a man's man who refuses to accept the cruel human sacrifices demanded by the 'god' Sarpedion and is set on destroying him.

To do this he needs some secrets of metallurgy that future social scientists are willing to give him. He manages to overcome all obstacles until of course he meets the dazzlingly lovely Lady Rhoaan who stops him cold.

In Lord Tedric (1 hour, 22 min) - Time is the strangest of all mysteries. Relatively unimportant events, almost unnoticed as they occur, may, in hundreds of years, result in Ultimate Catastrophe.

So, Skandos One removed the clothing from the Lady Rhoann and after one look, Lord Tedric did the rest!