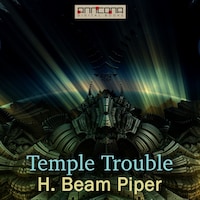 Miracles to order was a fine way for the paratimers to get mining concessions--but Nature can sometimes pull counter-miracles. And so can men, for that matter....

Did you know that our little earth is not limited to the single time line on which we happen to live? There are actually thousands, no millions of parallel times, each existing alongside all the rest. Some extremely primitive, some very advanced, bot all unaware of the others.

Of course this does not affect us at all, unless ... unless one of these time lines discovers the existence of the others and then a way to move easily back and forth from one to the other. Then a few problems might happen.

Well, it has happened and the ParaPolice are kept busy sorting out things like what happened here ...
Temple Trouble was first published in Astounding Science Fiction, April, 1951.