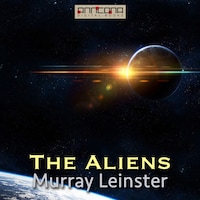 The Aliens is a science fiction novella by Murray Leinster first published in 1959.

The human race was expanding through the galaxy ... and so, they knew, were the Aliens.

Human civilisation is expanding across stellar systems. In some planets are found cairns, left by a hitherto unknown civilisation that humans nickname "Plumy". Some cairns are centuries old, others seem recent. Nothing else is known.

The earthlings have been searing for the Plumie homeworld and quite by accident they encounter one of their ships in interplanetary space.

The Aliens was first published in Astounding Science Fiction August 1959.