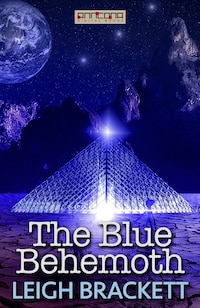 41 pages
AuthorLeigh Brackett
TypeE-book
Categories
NovelsNovelsScience FictionClassicsShort Stories
Share this book
The Blue Behemoth is a science fiction novella by Leigh Brackett.
Shannon’s Imperial Circus was a jinxed space-carny leased for a mysterious tour of the inner worlds. It made a one-night pitch on a Venusian swamp-town – to find that death stalked it from the jungle in a tiny ball of flame.
A huge amount of money for a simple job. The deal seemed too good to be true…
”Bucky Shannon leaned forward across the little hexagonal table. ”We,” he said, ”are broke. We are finished, through. Washed up and down the drain.” He added, as an afterthought, ”Destitute.” I looked at him. I said sourly, ”You're kidding!”
I've wet-nursed Shannon's Imperial Circus around the Triangle for eleven years, and I know. It's lousy, it's mangy, it's broken-down! Nothing works, from the ship to the roustabouts. In short, it is Buckhalter Shannon's Imperial Circus to Buckhalter Shannon's face unless he's tired and wants a long rest in a comfy fracture-frame.
Shannon got up. He got up slowly. I had plenty of time to see his grey green eyes get sleepy, and hear the quarter-Earth blood Martian girl wailing about love over by the battered piano, and watch the cat-eyes of the little dark people at the tables swing round toward us, pleased and kind of hungry.Somebody said, ”Excuse me, gentlemen. Is one of you Mister Buckhalter Shannon?”
Shannon put his hands down on his belt. He closed his eyes and smiled pleasantly and said, very gently: ”Would you be collecting for the feed bill, or the fuel?”
The Blue Behemoth was first published in Planet Stories magazine in 1943. E-book: ePUB, 10.700 words, reading time approximately 55 min.
Leigh Douglass Brackett (1915-1978) was an American author, particularly of science fiction, and has been referred to as the Queen of Space Opera. She was also a screenwriter, known for her work on such films as The Big Sleep (1946), Rio Bravo (1959) and The Long Goodbye (1973). She was the first woman shortlisted for the Hugo Award.