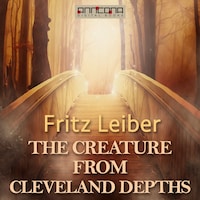 The Creature from Cleveland Depths

The Creature from Cleveland Depths is a science fiction novella by Fritz Leiber published in 1962.

The Creature from Cleveland Depths also known as The Lone Wolf tells the story of a writer and his wife who refuse to move below-ground after the cold-war gets hot.
The underground society discovers a decline in their ability to creatively innovate, and must consult with surface dwellers to develop products that satiate the needs of a people living like moles.

But the latest product to result from this alliance, “The Tickler” has frightening implications that only our heroes seem to notice.

This story first appeared in the December, 1962 issue of Galaxy magazine.

Fritz Reuter Leiber, Jr. (1910-1992) was an American writer of fantasy, horror, and science fiction. He was also a poet, actor in theatre and films, playwright and chess expert. With writers such as Robert E. Howard and Michael Moorcock, Leiber can be regarded as one of the fathers of sword and sorcery fantasy, having in fact created the term. Moreover, he excelled in all fields of speculative fiction, writing award-winning work in fantasy, horror, and science fiction.