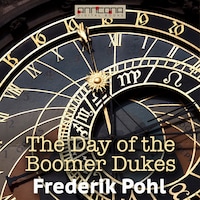 The Day of the Boomer Dukes

The Day of the Boomer Dukes is a science fiction short story by Frederik Pohl first published in 1956.

A bored resident of the future, reading a crime magazine from the 1950s, decides to time travel back to the 20th century with a suitcase full of weapons and offer his services to the Mafia. Just for a little excitement.

Just as medicine is not a science, but rather an art--a device, practised in a scientific manner, in its best manifestations--time-travel stories are not science fiction.

Time-travel, however, has become acceptable to science fiction readers as a traditional device in stories than are otherwise admissible in the genre.

The Day of the Boomer Dukes was first published in Future Science Fiction No. 30 1956.