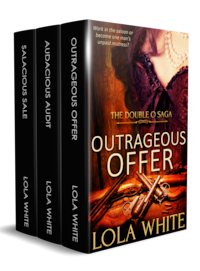 She has a choice to make—work in the saloon or accept an outrageous offer of being one man’s unpaid mistress.

Hyacinth Woodley is a desperate woman. Officially deemed a spinster with no marriage prospects in sight, alone after the death of her parents and out of money, she answers an ad for a mail-order bride, only to be rejected by her groom upon her arrival in Creek Bend.

Offer O’Neal is the new, less-than-proud owner of the Double O Ranch. After sinking every cent he had into the property, he’s left staking his dreams of success on stud fees from his horse, the only thing of real value he’s got. He can’t afford a wife, but a willing woman in his bed is an appealing prospect, and Hyacinth’s got nowhere else to go.

Just as Offer starts thinking of Hyacinth as the one bright spot in his otherwise stressful and unlucky life, the bridegroom who rejected her returns, demanding repayment for his investment. Ernest Horsham feels he’s spent a lot of money on getting the woman to Creek Bend under false pretenses, and the judge is on his side. But it’s only when Hyacinth is arrested as a thief and a fraud that Offer realizes how much he values her company.

She has little choice—she swore she’d never trust a man again, but she needs his help.

Opal O’Neal doesn’t trust any man. Since her brother’s death and her husband’s departure, she’s been raising her nephew alone, standing on her own two feet as years of drought have left the Double O on the verge of foreclosure. She’s struggling to stay a step ahead of utter ruin, and an investigation by a Home Loan Bank Board auditor is the last thing she needs.

Samuel Hollister is diligent about going over all of Opal’s paperwork, but he’d rather go over all of Opal. Living in the Dust Bowl, she’s a feisty woman who’s been keeping body and soul together through sheer force of will during the Depression, earning Sam’s respect and fostering his desire to help however he can.

The fight for Opal’s rights against foreclosure can’t compare to the burdens of Mother Nature, though. When the biggest storm the region’s ever seen descends on the Double O and puts her nephew in danger, Opal has no choice but to place her trust in Sam—something she’s sworn she’d never do.

Olivia Raines is trying to make her ranch a commercial success, but the odds—and the town mayor—are against her. Her elderly neighbor is in poor health, so she turns to his grandson for help, determined to use everything at her disposal, risking even her heart, to get the security she needs.

With his grandfather’s medical bills piling up, Creek Bend’s mayor demanding their water rights and Big Oil offering cash on the barrelhead, Cody O’Neal admits that the sale of the Double O seems inevitable.

He has to decide which is worth more—riches, after generations of struggling for prosperity, or love, the only thing the O’Neals have ever gotten right.