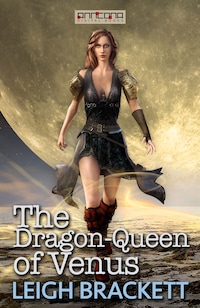 28 pages
AuthorLeigh Brackett
TypeE-book
Categories
NovelsNovelsScience FictionClassicsShort Stories
Share this book
The Dragon-Queen of Venus is a short science fiction story by Leigh Brackett.
More feared than the deadly green snakes, the hideous red beetles of that outpost of Earth Empire, was the winged dragon-queen of Venus and and her white Legion of Doom.
Attempting to make Venus safe for colonists turns out to be a very dangerous job for Tex and his partner Breska.
”Tex stirred uneasily where he lay on the parapet, staring into the heavy, Venusian fog. The greasy moisture ran down the fort wall, lay rank on his lips. With a sigh for the hot, dry air of Texas, and a curse for the adventure-thirst that made him leave it, he shifted his short, steel-hard body and wrinkled his sandy-red brows in the never-ending effort to see.
A stifled cough turned his head. He whispered, ”Hi, Breska.”
The Martian grinned and lay down beside him. His skin was wind-burned like Tex's, his black eyes nested in wrinkles caused by squinting against sun and blowing dust.
For a second they were silent, feeling the desert like a bond between them. Then Breska, mastering his cough, grunted:”They're an hour late now. What's the matter with 'em?”
Tex was worried, too. The regular dawn attack of the swamp-dwellers was long overdue…”
The Dragon-Queen of Venus was first published in Planet Stories magazine in 1941 as The Dragon-Queen of Jupiter. E-book, ePUB, 7.000 words, reading time approximately 35 minutes.
Leigh Douglass Brackett (1915-1978) was an American author, particularly of science fiction, and has been referred to as the Queen of Space Opera. She was also a screenwriter, known for her work on such films as The Big Sleep (1946), Rio Bravo (1959) and The Long Goodbye (1973). She was the first woman shortlisted for the Hugo Award.