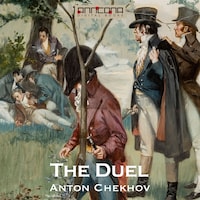 The plot centres around Laevsky, who is living in a small seaside town in the Caucasus after running away with another man's wife, Nadyezhda Fyodorovna, amid dreams of starting a new life. The dreams have come to nothing as Laevsky idles away his life drinking and playing cards, and Nadyezhda begins to have other affairs.

Laevsky's scheme to run away again, this time without his mistress, brings him into conflict with the rationalist Von Koren, who believes in Darwinian principles of natural selection and extinction of the weak and useless. Matters come to a head when an outburst from Laevsky leads to a duel. Von Koren is determined to teach Laevksy a lesson.

Duels having been exploited as plot twists throughout the writings of Tolstoy, Turgenev, and Dostoyevsky, the challenge for Chekhov is to make it work one more time in 1891, at a time when duelling had nearly died out in both society and literature. The result is a richly layered, utterly original, philosophically and psychologically ambiguous story of human love and friendship.
Total Running Time (TRT): 3 hours, 55 min. Reading by Expatriate.