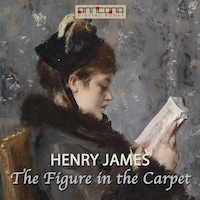 The Figure in the Carpet

The Figure in the Carpet is a novella published in 1896 in London, by Henry James.

The story is told in the first person. The narrator, whose name is never revealed, meets his favorite author and becomes obsessed with discovering the secret meaning or intention within all the author's works.

Heretofore, The Figure in the Carpet has evaded definitive interpretation. In his book Henry James (1913), Ford Maddox Ford wrote that after the nouvelle was published, James’ contemporaries had set themselves on a quest to locate the Figure as an identifiable physical entity. In the preface to his Choice of Kipling’s Verse (1941), T.S. Eliot wrote, “Nowadays, we all look for the Figure in the Carpet.” Absent a definitive interpretation, it opened new possibilities for the study of ambiguity in literature.

The story ostensibly concerns a young literary critics who greatly admires the writer Hugh Vereker. A meeting with Vereker, however, shows him that he – and all other critics – have in fact missed the great point of Vereker's work, and the critic (and his editor) thereupon devote themselves to trying to unravel the mystery.

James's story, however, almost certainly has an autobiographical side to it, perhaps itself criticizing those critics who couldn't see, or wouldn't see, the figures lost in the carpet of his own writing.