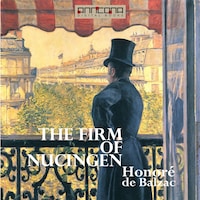 The Firm of Nucingen is a novel by Honoré de Balzac first published in 1837.

The novel is part of the Comedie Humane and a ”supplementary” tale to go with Father Goriot and Gobseck. Nucingen is the married family name of one of Father Goriot's daughters.

Balzac beautifully pens the great financial conspiracies in which some unscrupulous individuals (such as the Alsatian-born banker Nucingen and his wife's lover, Eugène de Rastignac) are enriched and generations of whole families are beggared.

The entire story is told as a conversation between four ”cormorants” who sit and drink in a private room while their talk is overheard through the paper-thin partition and reported to us by Balzac himself (or a fictional representative of the writer).

As in all of Balzac's tales of financial trickery, the machinations are incredibly involved and complex, yet their effects are devastating.

Balzac knows the weak point of those whose whole life is based on material concerns. If it is important to you to maintain a certain kind of carriage with fine horses and a picturesque ”tiger” to help manage them, if you require thousands of francs per annum to refresh your wardrobe and furniture, if you want to marry into a noble and/or wealthy family, you are at risk unless you play your cards extremely well.