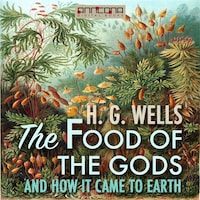 The Food of the Gods, and How It Came to Earth

The Food of the Gods, and How It Came to Earth is a science fiction novel by H. G. Wells, first published in 1904.

Wells called it ”a fantasia on the change of scale in human affairs. . . . I had hit upon [the idea] while working out the possibilities of the near future in a book of speculations called Anticipations (1901).” The novel is about a group of scientists who invent a food that accelerates the growth of children and turns them into giants when they become adults.

Mr. Bensington and Professor Redwood have invented a substance that causes living things to grow - and grow - and grow! As their experiments progress, the substance quickly gets out of control and the fun begins as insects and plants receive the benefit of the Food of the Gods.

Surely nobody would dream of feeding such a thing to a human child… would they?

In this little-known science fiction satire, Wells takes potshots at every member of society: scientists, ministers, charitable heiresses, revolutionaries, and everyone in between. Yet in the end, Wells shows his faith both in humanity and its never-ceasing progress.

There have been various B-movie adaptations.